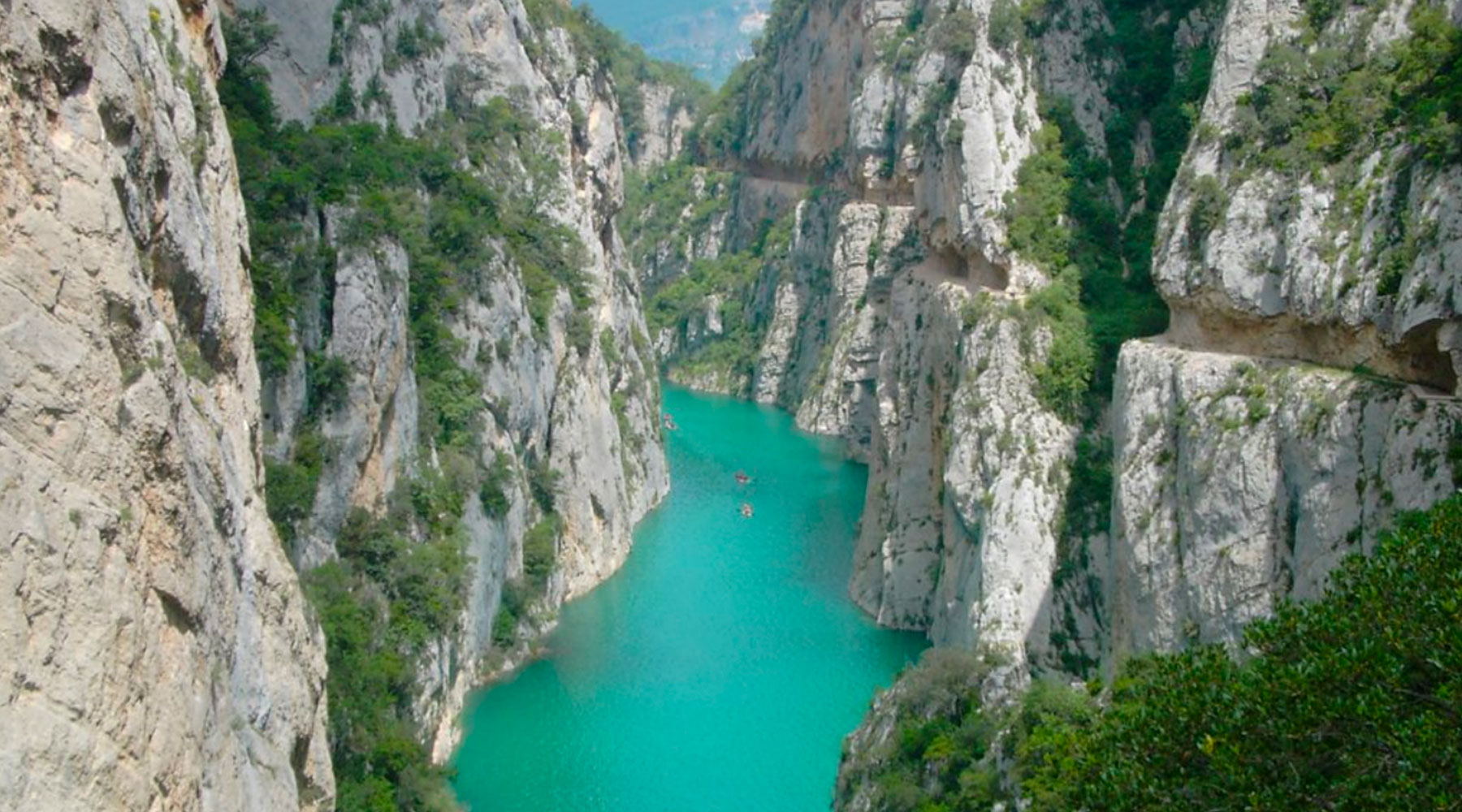 Goes at the Gorge of Mont Rebei has something of ritual initiation. Every time that it go will be the first. How it passes with the readings of some classical works, there are places that always save new discoveries and never end.

To talk of the Gorge of Mount Rebei is to talk of one of the most emblematic paths of the Catalan geography. Among it a lot of peculiarities can say that it shares border among Aragon and Catalonia, among the regions of La Noguerat and Pallars Jussà, and at any one time also spaces protected like the Natural Reservation of La Noguera and i la Serra del Montsec.

Nowadays, Montsec is an extraordinary territory that opens the doors to the Pyrenees, very affluent and varied and extraordinarily favourable for the adventure, the contemplation and the science at what can blast, sail, make climbing or stroll: three manners to displace that they result daily. In addition, the sky of the Montsec has been catalogued by the program Man & Biosphere of it UNESCO like one of the best skies in the world to observe the atmosphere.

This is the last big Gorge situated in virgin territory. The force of the landscape talks for itself: the big protagonists of this natural monument are the water (the river Noguera Pallaresa) and the rock. There are places that arrive to 500 metres of altitude and the river is sometimes 20 metres wide.
The suspended bridge over the ravine of Saint Jaume is a surprise, creating an emotion that only walking at 40 metres above the level of the water can do. There is also the Colomera Cave, which you access by crossing the Ferrata road to the delight of the more adventurous.

Itineraries on foot, by kayak, on bicycle or delta wing make of this territory an exceptional place for the active tourism. Of big ecological value, its almost 600 hectares of protected land guarantees the visitor that nature is well treated. In front of so much beauty, it’s not surprising that more of a traveller experiences one “Stendalhazo”.

After this dip into the deep Prepirineu, the most fearless traveller that for the morning left avid for adventure, will return satisfied and will appreciate relaxing at Lo Palauet.

Path 1: it is the usual route. Tracking it GR-1, 4 km of itinerary, gone and return. Length wanted: 4 hours.

Path 2: Lo Queixigar and seeviws of Altamiris: 2 km for little more of three hours. Also, it crosses the suspended bridge and the ravine of Maçana.

Path 3: L’Obaga Gran i carboners, resort of 2,5 km along the way of the Screes. After passing the ravine of the Jullanes links with the itinerary 2.

Another of the accessible and interesting visits next to Lo Palauet de la Muralla is this Cistercian monastery of the 12th century, situated near Balaguer and that you can access…

The train of the lakes

The train of the lakes is a tourist train on a historic trail - vintage that circulates on Saturdays and lets one explore Lleida step by step.

Stroll around the river Segre

For the visitor to Lo Palauet de la Muralla it is a must to take time and stroll near the river Segre.

© 2020, Lo Palauet de la muralla - All rights reserved
Back To Top
We use our own and third-party cookies to obtain statistical data on the navigation of our users and improve our services. If you accept or continue browsing, we will assume that you agree. Cookie policyI AGREE
Privacy and cookie policies

This website uses cookies to improve your experience while browsing the website. Of these cookies, cookies that are classified as necessary are stored in your browser as they are essential for the operation of the basic functionalities of the website. We also use third-party cookies to help us analyze and understand how this website is used. These cookies will be stored in your browser only with your consent. You also have the option to disable these cookies. But opting for some of these cookies may affect your browsing experience.
Necessary Always Enabled